Check back for future mapathons, hosted by George Mason University.

George Mason University (GMU) has helped USAID/OFDA by mapping the bulk of two volcanoes in Indonesia.

In direct support of USGS/VDAP’s disaster preparedness programs in Indonesia, GMU hosted its second mapathon–this time focusing on Mt. Gamalama. This was done as part of a friendly competition between GMU and regional rival, George Washington University. 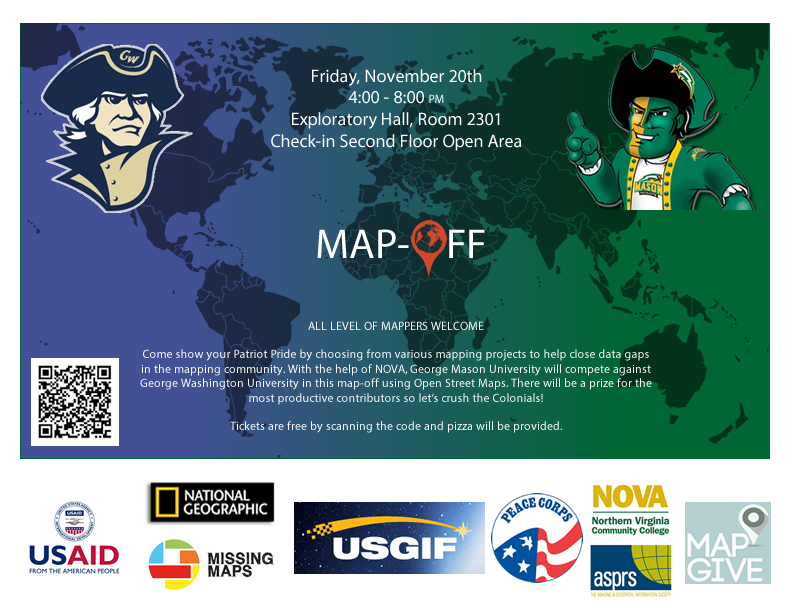 For this Mapoff, around 100 volunteers from GMU, Northern Virginia Community College (NOVA), and local high schools attended. At the end of the event, volunteers had created 16,735 buildings, 739 roads. Addtional work post-mapathon brought totals to 45,000+ buildings, 1,000+ roads, 20 bridges, and 10+ inland waterways for Ternate Island. Pictures of Ternate Island’s before/after can be found on the [Mt. Gamalama volcano profile page[(https://volcanomapping.github.io/volcanoes/gamalama/), as well as on OpenStreetMap.

In early 2015, GMU hosted its first mapathon. Over 100 volunteers attended and were able to create infrastructure data around Mt. Karangetang (a joint MapGive and USAID/OFDA task). After the end of the event, 95% of the task had been completed, with the remaining tiles finished very soon after.